Check out the newest YouTube edition of Team Melli Talk as we tackle the 2022 FIFA World Cup that will be held in Qatar. Originally it was known that 32… Read more »

Rumor has it that Qatar has invited Iran to participate in a four-team friendly tournament in March 2019. Brazil is expected to be one of the four teams at the… Read more »

Okay everyone there is always something going on in Iranian football, so I will break down the latest headlines the best I can. Mustafa Denizli hired by Tractor Sazi Tabriz… Read more » 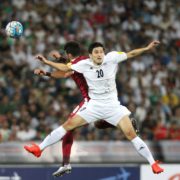 Team Melli play-by-play commentator and film producer Behrooz Afrakhan joins us for the newest edition of Team Melli Talk! Behrooz has covered the national team of Iran at past World Cup… Read more »