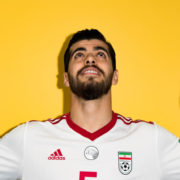 Team Melli, the national team of Iran, is looking good in the current edition of the Asian Cup with two wins in two matches. The latest match, a 2-0 victory… Read more »