The smoke has cleared a little, but Iranian football fans still aren’t fond of head coach Marc Wilmots. But besides Wilmots’ mistakes, what else went wrong for Iran in the… Read more » 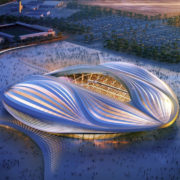