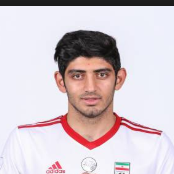 Karaj – Looking to avoid one of the bottom three relegation spots, Saipa hosted FC Mashhad on 23 January at Shahid Dastgerdi Stadium. The only goal of the match was… Read more »