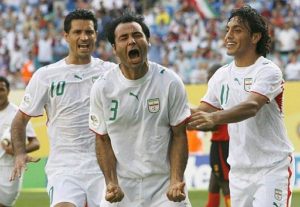 The player in our spotlight this week is Sohrab Bakhtiarizadeh, former center-back for Team Melli.

Although Bahktiarizadeh played for Iran from 1997 to 2006, he was an on-and-off member who rarely solidified a starting role.

But during 2005/06 Iranian Pro League season, Sohrab’s fantastic form with Saba Battery earned him a call-up to the 23-man squad for the 2006 World Cup in Germany.

Sohrab came on as a substitute for Yahya Golmohammadi when the latter came away with an injury against Portugal.

Bakhtiarizdeh started at center-back in the next match against Angola and scored Iran’s only goal after connecting on a Mehdi Mahdavikia corner kick to earn a 1-1 draw for Iran.

Sohrab Bakhtiarizadeh immediately retired from international football following the World Cup, but he made the most of his opportunity and Team Melli fans will never forget his emotions after the goal against Angola.

Bakhtiarizadeh retired from football in 2014 when he last played for Esteghlal Khuzestan.