Alkmaar – Eerste Divisie side SC Cambuur’s fairy tale run in the Dutch Cup came to an end in heartbreak against AZ Alkmaar on 2 March. After one-hundred and twenty… Read more » 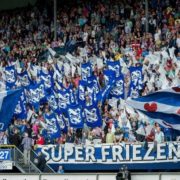 Heerenveen – Iranian striker Reza Ghoochannejhad put on the finishing touches of a 3-0 victory over visitors Roda JC Kerkrade on 25 February in Eredivisie. After a scoreless first half,… Read more »