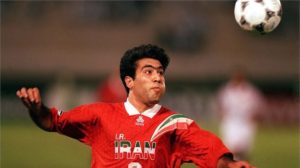 The player in our spotlight this week is Mehdi Mahdavikia, former winger for Team Melli.

Mahdavikia played for Iran from 1996 to 2009 and will always be remembered for his memorable clinching goal against USA at the 1998 World Cup in France.

Mehdi was known for his runs and he was dangerous with corner kicks or free kicks. Mehdi had a long tenure in Germany and played for Hamburger SV from 1999 to 2007.

Mahdavikia started and ended his career with Persepolis and made his debut for Team Melli at the age of 19.

Mehdi Mahdavikia is part of the Golden Era for Team Melli footballers and he is the fourth most capped player for Iran after Ali Daei, Javad Nekounam, and Ali Karimi.