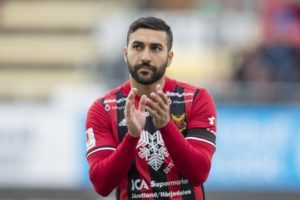 Okay let’s face it, a lot of football fans aren’t very big on Europa League because everybody is all about Champions League but Europa League is worth paying attention to because of the unknown teams that make it to the group stages.

One of the most surprising teams so far in UEFA Europe League is Ostersunds FK of Allsvenskan, the top flight of Swedish football.

A club that was formed in 1996 and based in a city in northern Sweden where winter sports are more popular, Ostersunds FK is one of the feel-good stories in the current edition of UEFA Europa League.

After nearly twenty years of playing football in the lower tiers of the Swedish football pyramid, Ostersunds debuted in the Allsvenskan for the first time ever in 1996.

In its first season in the Allsvenskan, Ostersunds finished eighth in the table but qualified for a Europa League play-off spot after defeating IFK Norrkoping 4-1 in the Swedish Cup Final in April 2017.

One of the players who has had a major role in the success of Ostersunds is Swedish-Iranian forward Saman Ghoddos of Malmo.

Ghoddos scored a goal in the quarter-finals against Trelleborgs, added a brace in a 3-1 semi-final victory over BK Hacken, and added the fourth goal in the final against Norrkoping.

In the second qualifying round of Europa League, Ostersunds were up against tough opposition in Turkish giants Galatasaray.

Ostersunds shocked Galatasaray in the first leg 2-0 and both goals were scored by Saman Ghoddos. One week later in Istanbul, a 1-1 draw saw Galatasaray eliminated and the little-known club from northern Sweden advanced.

After getting past Luxembourgian club Fola Esch with ease, Ostersunds found themselves in a hole after losing to Greek club PAOK Thessaloniki 3-1 in the first leg away from home.

But a brace from Saman Ghoddos in a 2-0 home victory saw Ostersunds advance to the Europa League Group Stage on away goals.

Drawn in Group J, Ostersunds are perfect so far after a 2-0 win away from home over Ukrainian club Zorya Luhansk and a 1-0 win at home against German club Hertha Berlin.

Next up is a home game at Jamtkraft Arena against Spanish club Atletico Bilbao on 19 October.

The Spanish club that is based in the Basque country only has one foreign based player but have yet to score a goal in the group stage after a scoreless draw with Hertha Berlin and a 1-0 loss to Zorya Luhansk.

Bilbao is favored according to the online bookies but Ostersunds will be playing at home in front of their home supporters and Saman Ghoddos will be tough to stop.

Art Eftekhari AKA Mr. Bookmaker is the host of The Bookmaker Podcast. Check out his latest blog on international football (soccer) 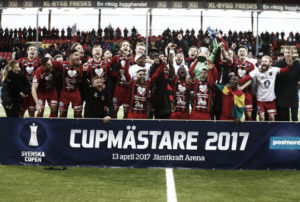